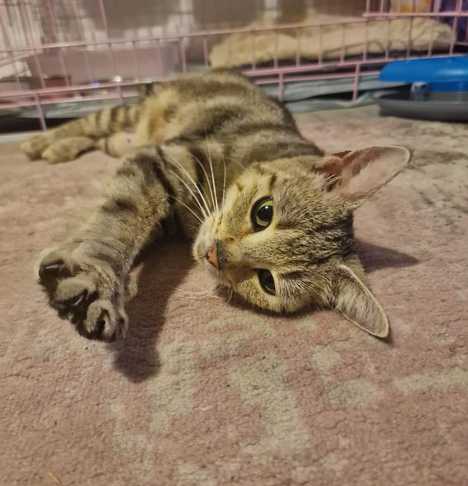 Blondie came in with her kittens in August, she had a litter a few months before in a garden so they were at least her second litter but it's likely just one of many, she's a tiny little dot of a cat and was extremely underweight when she came in at 2kg. She's now up to 3kg and has totally filled out, her bony body is covered in some much needed meat after the kittens constant draining her.
She's extremely fussy when she trusts you, and loves nothing more that rubbing herself up against you and purrs non stop.
She is however very timid at first, and will still dart under chairs if you walk past too fast or if she hears an unexpected noise.
She's fantastic and super gentle with my very cat savvy kids, but would probably flohrish in a home without small noisy ones.
Blondie loves other male cats, she's desperate to be best friends with them and loves some mutual grooming! She's been vile to a little female kitten but it's very likely just her hormones as that's settled down nearly completely after a week!

Blondie will be neutered, vaccinated and chipped before she goes to her forever home, she also needs a dental so this will be covered by us too.
She's estimated to be between 1 and 3.
She is very keen to get outside, so will want a home with a safe garden or away from busy roads.

Our adoption fees cover the following:

*In some cases due to age or medical necessity, some animals may not be spayed or neutered before leaving rescue. In this case, the animal would be adopted under a 'spay contract' to be spayed at a date after adoption.