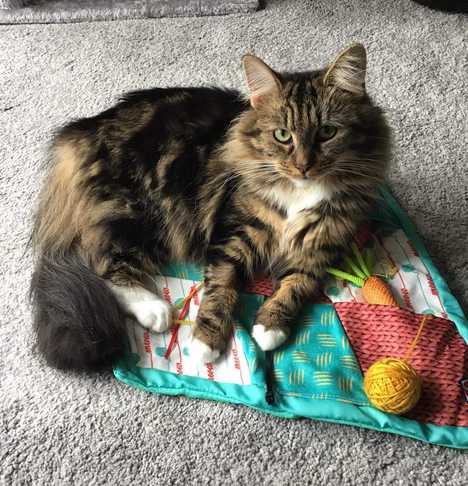 Chloe is a 2 year old neutered vaccinated and chipped gorgeous girl who is looking for her forever home. Her current owners have had her since December 2020, and unfortunately due to their housing contract cannot keep her. As you'll be able to tell from the below information from them, they have given her incredible care and love.

She has never lived with dogs, she has lived with cats and our cat who she plays and gets on with. She previously lived with children but they were too much for her.

Chloe has mainly been an indoor cat, however since being spayed and microchipped she has started going in the garden, so far she has only stayed in the garden, she loves chasing bugs, insects and pouncing. We feel she would benefit from having access to garden or outdoors via cat flap.

Personality
Chloe is very loving, she loves a fuss, she will sometimes curl up on your lap or lay next to you, she loves a play, she is very energetic and kitten like with playing. She can be vocal and will let you know if she wants feeding or attention. She can be very timid and can get very spooked, especially by strangers who come to the house, or if she hears noises whilst sat in the garden, such as a neighbour shouting or children playing/screaming in the garden. Since having Chloe, she has never shown any signs of aggression towards us or scratched us, hissed etc… Chloe will often meow/call if she can’t see you so if you are upstairs she will come and find you, she likes to check where you are. With the right love, care and attention, Chloe is a very loving, trusting, happy cat who will often strut around with her tail up and will often expose her belly to you.

Toileting
Chloe is brilliant with toileting, she hasn’t had any accidents and has always used her litter boxes. She is used to a clean litter box, which they are all sieved and cleaned daily. She is used to wood pellet cat litter and has only done her toileting in a hooded litter box throughout her life. If she is in the garden, she will come in to use litter box.

Grooming
Chloe will let you brush her, she will often purr when doing it. Her tail is quite fluffy and sometimes she gets a bit of poo around her bottom area and tail, she will let you cut these bits out with scissors but it helps to distract her whilst doing it. She doesn’t like it being shaved, the noise spooks her. She has had her claws clipped at the vets on a couple of occasions.

Medication/ flea and worming
Chloe isn’t currently on any medication but has had medication such as pain relief such as Loxicom (but this gives her DIARRHOEA) and antibiotics, she is easy to give medication, liquid form or crushed tablets, she will eat it mixed in wet food. She doesn’t run away when she has her flea and worm treatment on.

Diet/feeding
Chloe has James Wellbeloved dry turkey light and AVA sensitive skin and stomach wet food, she had approximately 1 pouch spread throughout 4 smaller meals and the rest made up with dry food that is available throughout the day. When we first had her she used to have a lot of flatulence, which would often have unpleasant odour, since feeding her this diet she has improved. Also avoid giving her egg, when she has had egg (often if left on the side) she has had mushy stools. We also have a automatic pet feeder which we were advised by vet to purchase as she was waking us up around 4am for food, since having a feeder that feeds at 4:30am, this has helped us to sleep throughout night without her waking us, she will settle once this feed until we get up.

Play
Chloe is very playful, she is playful first thing in morning and especially at night and during early hours. She will wrestle and chase with our other cat, although he can get boisterous sometimes with her when wrestling so she hisses at him (usually he has hurt her when biting too hard). She will watch and chase/pounce at insects in garden, she can play by herself, such as chase Pom-poms, or home made foil balls etc, she loves toy mice, kitty roundabout/ catit circuit track etc.. She likes puzzles and laser game, but her favourite is the Da-Bird, she currently has the feather part loose that she loves to walk around with in her mouth and then we’ve attached a wiggly worm on the end which she loves and will fetch off the worktop. I think if she lived with an elderly cat, I fear she may annoy him/her. We are currently taking turns to sleep downstairs with Chloe to stop her running up and down the stairs during the early hours and don’t want to upset the neighbours, we do play with her at night before bed to the point she is panting sometimes but then around 30 minutes later, she is up playing again, which is why we feel she has too much energy to be an indoor cat. But she does settle when someone is with her downstairs, we have tried to leave our other cat downstairs with her but after 1 night, he makes a bolt upstairs now, he likes to sleep upstairs and will settle at night.

Health
We don’t have a full history on Chloe but since having Chloe, she had flea allergy dermatitis treated with steroid injection, infection of lymph nodes in her throat which was treated by antibiotics (now cleared). She has gingivitis which is believed to be triggered by grooming her flea allergy and she lost an upper incisor. So only have health history dating from December/January time.

Other
Chloe drinks from a Catit fountain which she will have to go with her as we have 2, she will have toys to take with her, bed, blankets, cat tree etc… all her favourite things that she is familiar with.

Our adoption fees cover the following:

*In some cases due to age or medical necessity, some animals may not be spayed or neutered before leaving rescue. In this case, the animal would be adopted under a 'spay contract' to be spayed at a date after adoption.