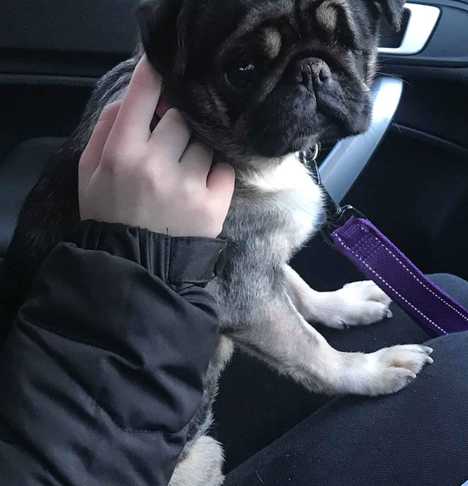 This teeny little lady is Phoebe, a 3 and a half year old female pug who came into us a couple of weeks ago.

Phoebe hasn't had the greatest start, she came from a travellers site and then was rehomed a year ago to someone who never took her out of the house. When she came in she had nails curled round growing into her pads, she was very malnourished and had eaten a bread roll for her breakfast that morning !

Phoebe is tiny even for a pug, she is very wonky in general which makes her even more endearing! She has 2 eyes, but only vision in 1. Her little jaw is wonky, her back legs too, and she has abnormally narrow ear canals. She also has an umbilical hernia which will be corrected when she is spayed.

Due to her past, she has never been toilet trained, but is coming on really well with it now and is also being crate trained. She doesn't like being left, so wouldn't suit anyone that is out of the house for longer than a couple of hours a day. Phoebes foster has been taking her on lots of little walks to get her used to the outside world.

She is like a shadow in the house and just wants to be loved, she craves affection all the time. She is fine with dogs and cats out and about, but is food aggressive towards them when its feeding time. We would be looking for a pet free home for her ideally where she can be the sole focus of attention, or with just 1 other small neutered dog that can be fed separately.

Phoebe is fine with older kids in foster, we would be happy to consider a home for her with dog savvy children around 8 plus.

Phoebe is will need to be adopted on a strict spay contract as she is very nearly in season, so we cannot get her spayed for another 3 months. She will need to return to either Bright Side vets in Swadlincote, or to any branch of Scarsdale for this to be done, her adoption will not be completed until this is done. She is vaccinated, chipped and flea and worm treated. Her spay will be included in her adoption donation of £185.